From its earliest known origins in Europe in the Middle Ages the Pinot gris grape has become a popular choice for wines all over the world. It is a white wine grape that is thought to be a clone of the Pinot noir grape. Its name, "pinot gris" is the French for grey pinecone and this accurately reflects the color and the shape of the bunch as it grows on the vine. However, the color of the fruit can vary dramatically, as can the color of the wine produced from it, which can range from a deep yellow to a copperish color.

There are clones of this popular grape grown all over the world and the wines produced from Pinot gris can vary dramatically, depending where the grape is grown.

Two areas in particular stand out for the quality of wine made from the grape. Alsace in France is the traditional home of the grape, while Oregon in the United States has more recently produced Pinot gris wines of particularly high quality.

In Alsace, it is popular as a full-bodied wine, while in Italy there are some distinguished producers who produce some excellent wines. However, the bulk of Italy's Pinot grigio producers harvest early to produce less satisfying results.

Pinot gris is often blended with Pinot noir wines to improve their flavor. It goes well with chicken, pork and seafood and remains a very popular choice, with only Chardonnay being more popular.

It has been recently discovered that the Pinot gris has an almost identical DNA profile to Pinot noir and that the difference in color is caused by a genetic mutation that is thought to have happened hundreds of years ago.

Earliest records of the cultivation of Pinot gris go back to the Middle Ages in Burgandy, France where the grape is thought to have been known as Fromenteau. Pinot noir was grown here around the same time and the popularity of both spread eastwards over time.

It was popular in Switzerland and Hungary, and was discovered being grown in Germany in the 1700s by the name of Rulander. A number of bad harvests threatened the use of the grape in many parts of Europe but certain strains of the vine proved more resilient and its cultivation continued.

As the list of regions above would suggest, the Pinot gris vine favors cool climates and is known to mature early. This can result in a sweet flavor or high alcohol content, depending how long it is fermented.

The color of the grape itself can also vary depending on the region in which it is grown. It can be found to show a greyish color, or else a pinkish brown.

The flavor of the wine it produces can also depend on where Pinot gris is grown, and of course from the wine making style. In Alsace, they are generally medium-bodied wines, often with lightly citrus flavors.

The German varieties are more full-bodied, while in Italy, where it is known as Pinot grigio, it produces a crisp, light-bodied taste. The newly popular Oregon Pinot gris wines are medium bodied with fruity flavors.

The Alsace region is considered the home of the Pinot gris grape and is different here from anywhere else it is grown. The cool climate and soil of the region makes for a very high quality grape.

Since its grape’s introduction to the country in 1832, the southern state of Victoria has been producing wines going under the names of Pinot gris and Pinot grigio depending on the sweetness of the wine. Again, the temperate climate there and long autumns suit the grape and Australian Pinot gris wines remain popular.

Pinot gris is a long established and popular grape in Italy, where it is known as Pinot grigio. It is found growing in the north of the country in Lombardy and Alto Adige.

New Zealand’s cool climate also lends itself to the growing of Pinot gris. On the North Island it is to be found in Martinborough and Hawkes Bay, while in the South Island it is grown in Central Otago, Nelson, Marlborough and Waipara.

After Alsace, Oregon is probably the most successful Pinot Gris growing region where the wine became quite a hit locally as an accompaniment to the generous amounts of fresh salmon caught in the region.

It was introduced to the region as recently as 1966 and within 30 years all of the main wineries in the region were growing the grape. There are more than 1,797 acres of Pinot gris being grown in Oregon today.

There are also healthy amounts (1,620 acres) of the grape grown in southern and central coastal regions of California. The wine is similar to the Italian Pinot grigio in taste, and often goes by the same name. However, the California variety has struggled to match the quality and the popularity of its Oregon counterpart.

View the video below for more information about the differences between pinot gris and pinot grigio wines.

Wine lover/entrepreneur and marketer of unique products and gifts. I am an e-commerce entrepreneur providing online sales of classic wines and craft beers! I developed and expanded this e-commerce website to market a large array of fine wine and craft brew products online to provide visitors a unique food pairing experience with chef-prepared meal kits as well as boutique olive oils. Let's not forget those floral arrangements to begin a well-planned special evening of romance with products from this e-commerce site. Enjoy!

View all posts by: Brad Littlefield 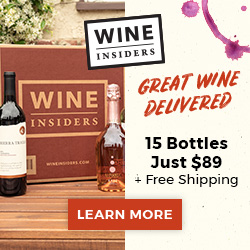 A Hint of This, A Dash of That and A Sip of Now

Visit our partner blog A Hint of This A Dash of That and A Sip of Now to read and enjoy more wine-related events, topics and happenings!